Devin Parr published an article in Wine Country titled The Best Wines to Pair with Your Halloween Candy. Who would have thought that our Sparkling Syrah would pair with Smarties. Devin explains, “These sweet-tart tubes of tiny candy disks are a true Halloween staple. Those little bites have a sweet and fruity flavor profile and a uniquely chalky finish, perfect for pairing with a glass of crisp, cold, sparkling wine.”

If Smarties are not your thing, there are several other recommended pairings such as Twizzlers and Grenache, Starburst with Rosé or Milky Way with Cabernet. It may sound frivolous to pair wine with candy, but Devin holds a certification in wine expertise from the Apicius International School of Hospitality in Florence, Italy, as well as the Wine and Spirit Education Trust (WSET) Diploma, so she knows what she’s doing.

In addition, trying different wines with a wide array of foods – even Halloween candy - is the best way to discover what flavors work with different varieties of wine. It is also the kind of practice that cements various flavors in your mind so you can identify them later.

Our winemaker, Ashley Herzberg, says a mentor once told her to write down everything she tastes and make notes to describe it. Doing this repeatedly creates the memories that allow you to identify even the most unusual flavors.

If on the other hand, you don’t especially care if you can identify a vast array of flavors, you may want to simply plan a Halloween wine tasting party. You can impress your friends with this unique spin on wine tasting and Devin’s article provides the perfect shopping list.

Read The Best Wines to Pair with Your Halloween Candy. 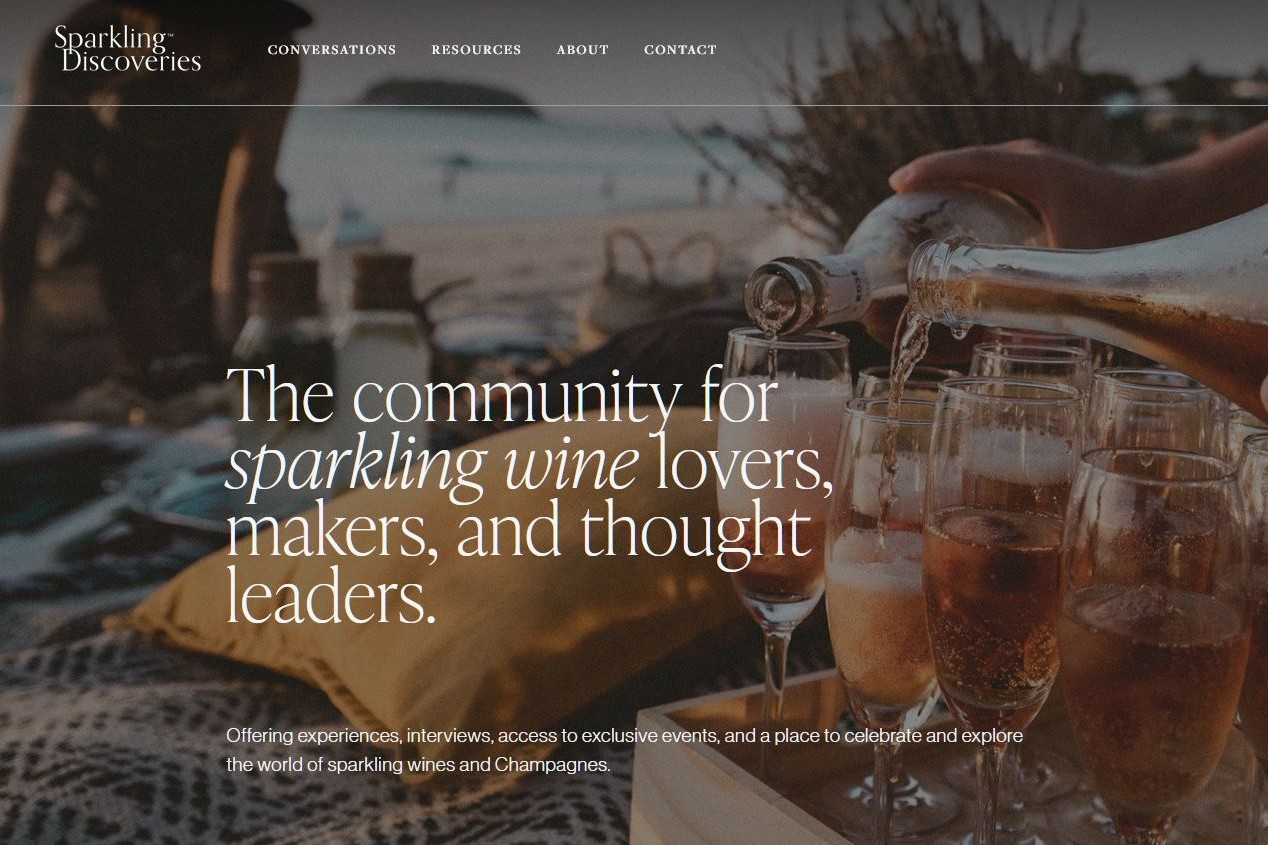 Wine Business Monthly today announced the launch of Sparkling Discoveries, an online community for sparkling wine lovers, makers and thought leaders. The press release goes on to explain that “the community aims to be the first brand-agnostic informational resource and hub for all things sparkling wine, including news, interviews and maker profiles, events, education, and more. Appropriately, the platform will officially launch on Global Champagne Day, this year falling on October 28, 2022.”

Conversations with the People Behind the Sparkle

We are beyond excited about this launch. Our goal with Sparkling Discoveries is to create a brand-agnostic resource about all things sparkling wine. The centerpiece of the platform shines a light on the amazing people involved in sparkling wine, both in Sonoma County and beyond, by bringing their stories to life with in-depth interviews. Sonoma sparkling icons like Joy Sterling, Proprietor of Iron Horse Vineyards, Eileen Crane, retired founding winemaker and CEO of Domaine Carneros and Penny Gadd-Coster, of Rack and Riddle and Breathless Wines, are a few of the people featured in the initial launch of the platform.

Not surprisingly, Amista Winemaker Ashley Herzberg is among those featured and reveals how she fell in love with sparkling wine, making her first "grower sparkling wine", the bubblies she has in her refrigerator right now and what she hopes her children learn from her work as a winemaker.

Do you know someone we should feature? Nominate them for Sparkling Discoveries and help us build the community.

Concurrent with the launch of the new platform, Sparkling Discoveries is introducing a campaign focused on the trailblazers within the sparkling wine industry. The “Sparkling Stars” program invites sparkling wine lovers, wine professionals, and the community at large to nominate those who are making an impact on the growth, promotion, and future of sparkling wine. Nominations will be open until December 31, which marks National Champagne Day.

Sparkling 101 – All You Need to Know About Sparkling Wine

We have big plans for Sparkling Discoveries, which is the first resource of its kind. We look forward to bringing the exciting world of sparkling wine to life for those in the industry as well as wine lovers who want to dig deeper into what this celebrated beverage is all about. 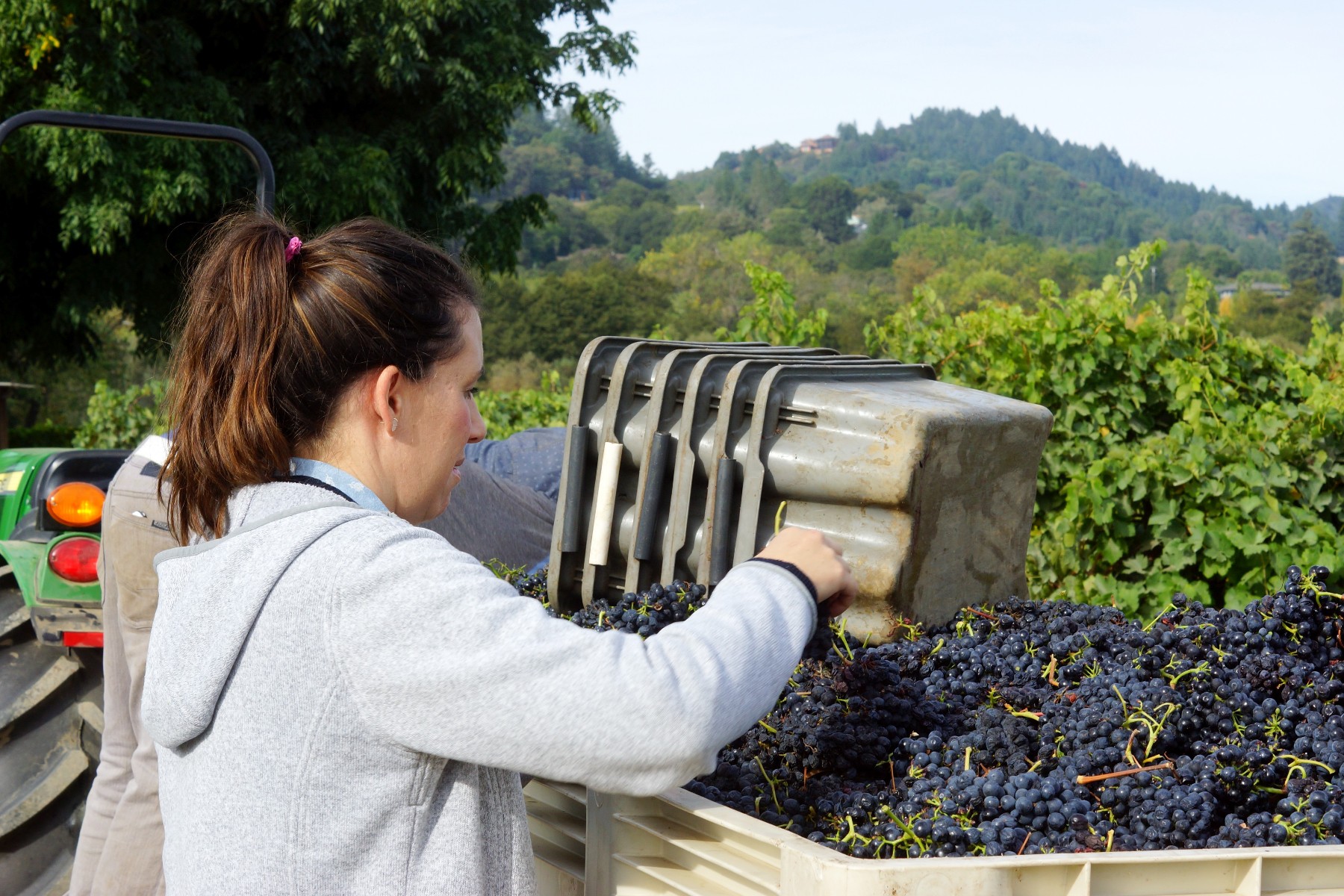 I Fell in Love with Sparkling Wine & Now I Make It!

This year marks winemaker Ashley Herzberg’s 12th harvest at Amista Vineyards. She has been a sparkling wine trailblazer! She was the first to make a “grower sparkling wine” in Dry Creek Valley.

At the time, most sparkling wines in California were made by large producers with grapes purchased from multiple vineyards in the tradition of Champagne. In France, grower Champagne has become the rage in the last two decades with small, family-owned houses making Champagne from their own grapes.

Grower Champagnes are treasured because they are limited and hard to find. People love to discover hidden gems! And that’s what Ashley is making right here in Sonoma County.

We had a conversation recently about her sparkling discoveries.

How I First Discovered Sparkling Wine

I know you love Champagne and sparkling wines. I’m curious to know what first drew you to sparkling.

I actually really didn't like sparkling wine at first. My parents are the ones who introduced me to wine, and they didn't drink a lot of sparkling wine. My only exposure was to really bad sparkling!

I didn't know what was possible in the world of sparkling. I don't know what the exact catalyst or the exact wine was, but I think it was a Champagne and I realized how complex it could be. It can be toasty and yeasty, fruit driven and acidic. It can be so many things all in one glass and I just loved it.

So, the first time you finally had a good sparkling wine, you fell in love?

The very first time! Before that I thought very sweet sparkling wines were the only things that were available.  Even when I was a child, I did not have a sweet tooth. I had an aversion to sugar. The only thing I knew was sparkling wine is sweet. And it's gross. It's not good wine.

“The only thing I knew was sparkling wine is sweet. And it's gross. It's not good wine.”

And then discovering that there was this whole other world, was so exciting. I realized there’s so much to learn about sparkling wine and so many wines to try. And there are so many different varietals you can use to make it. 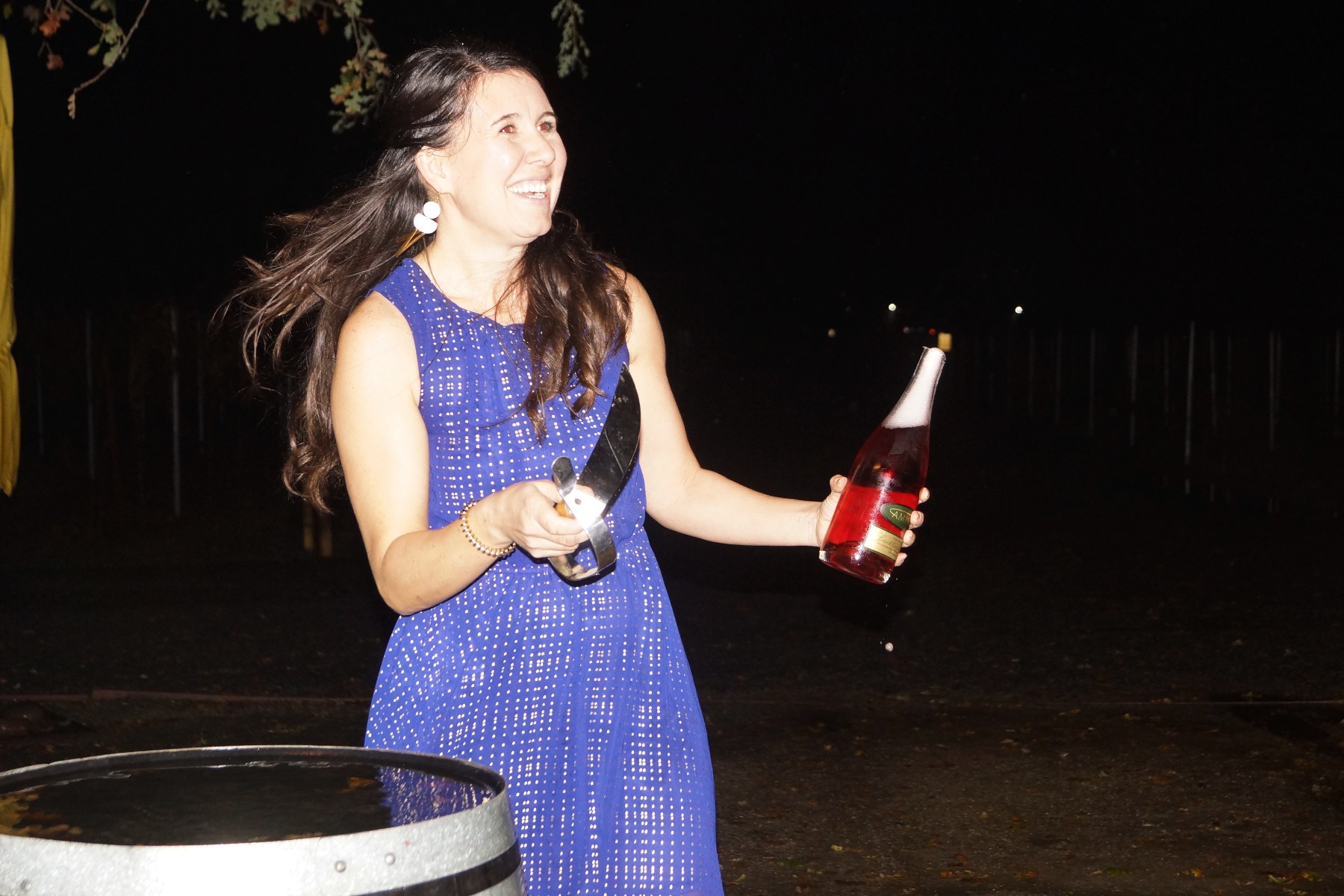 Ashley Herzberg Performing a Sabrage on a Bottle of Sparkling Wine

Yes, because Mike (co-founder of Amista) had given me a couple bottles of your Sparkling Syrah as a Christmas gift. I assumed it was going to be sweet. I said to myself, “I’m not drinking that.”  Many months later I pulled it out for my girlfriends, and they loved it. I had my first taste and was so excited.

Then two years passed between me tasting your sparkling before I came to you and said I wanted to work with you as your winemaker. In that time, I had already begun my exploration of sparkling wines and realized how much I loved them.

“The challenge and excitement of making a sparkling wine was enticing.”

I wanted to work with you because I had familiarity with your still wines. But the challenge and excitement of making a sparkling wine was enticing.

Aside from being a lover of sparkling, I know you are also a lover of learning. What would you say are your biggest lessons learned about making sparkling wine?

When I made that first sparkling wine, I knew how to pick for still wines, but I was so worried about when to pick for sparkling wines. How do you maintain the acidity and not have too high a sugar level? Penny (Gadd-Coster, consulting winemaker) at Rack and Riddle said, “you just still pick for flavors. You're shifting what you're looking for in those flavors. But you're still picking for flavors.” And I was like, oh, OK, I know how to do that!

OK, so learning how to pick the grapes for sparkling wine was a big lesson learned. What else?

Since I was starting from scratch on making sparkling wine, I didn't have any base of knowledge, so everything was something new to be learned. Penny was very important, especially that first year.

She was a ball of wisdom. Little things would come up in conversation. Penny had this very chill attitude about it, the way I had come to feel about making still wines. What I learned is that it’s just winemaking.

People say, ‘I’ve never made sparkling, and I wouldn’t know where to start. It’s so different than making still wine.”  But it’s not. If you know how to make wine, you can make sparkling wine. Yes, there are some different processes for sparkling, but it is basically just the same as making still wines. That was really helpful to learn - you're just making wine. 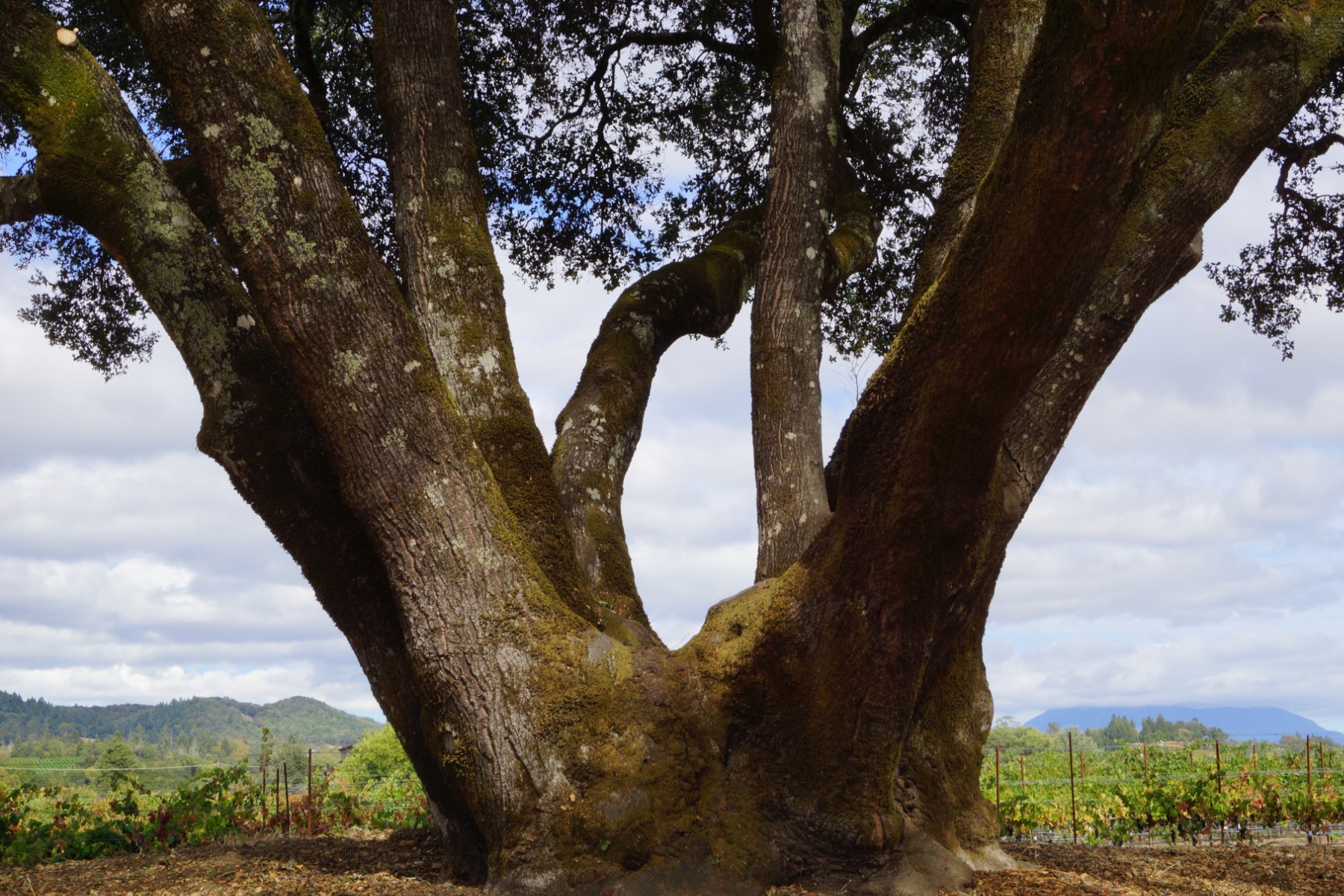 Our little town of Healdsburg takes center stage in this article that curates a perfect Sonoma wine country getaway. And Amista is one of the recommended wineries to visit for not only a taste of wine, but also a taste of nature.

Venture Out to Taste Among the Vines

Writer Jessie Beck says, “To sample the area’s best vintages, it’s absolutely worth venturing out to the wineries for a tasting among the vines.” The articles feature wineries that pair wine with nature including, Amista Vineyards that offers “wine and hike tours.”

Healdsburg has become a destination for well-heeled travelers. “Right now, one of the most exciting towns to stay in is Healdsburg, which is experiencing a spate of openings and remodels,” explains the article. At the same time, Healdsburg remains a charming hometown where, as locals, we enjoy the same activities described by the author.

We agree with the writer’s advice, “Even if you have been to Healdsburg before, go again. Though many old favorites remain, much is changing in this small NorCal town. Use this guide to navigate it all—from where to stay and things to do to what to eat and drink in this corner of Sonoma wine country.”

We Love Sharing Healdsburg with You!

We are blessed to call this our home and love to share it with you. We are especially proud of our Vineyard Adventure Walk, which was developed in partnership with the Sonoma County Winegrowers. You can enjoy a self-guided stroll around our vineyard and see the grapes we grow, view our 200-year-old heritage oak and learn about the Habitat Restoration Project designed to restore the habitat for the Coho salmon and Steelhead trout that run in Dry Creek.

We invite you to experience Healdsburg, enjoy our Vineyard Adventure Walk and explore our estate grown sparkling and Rhône wines. Come Taste with Us!