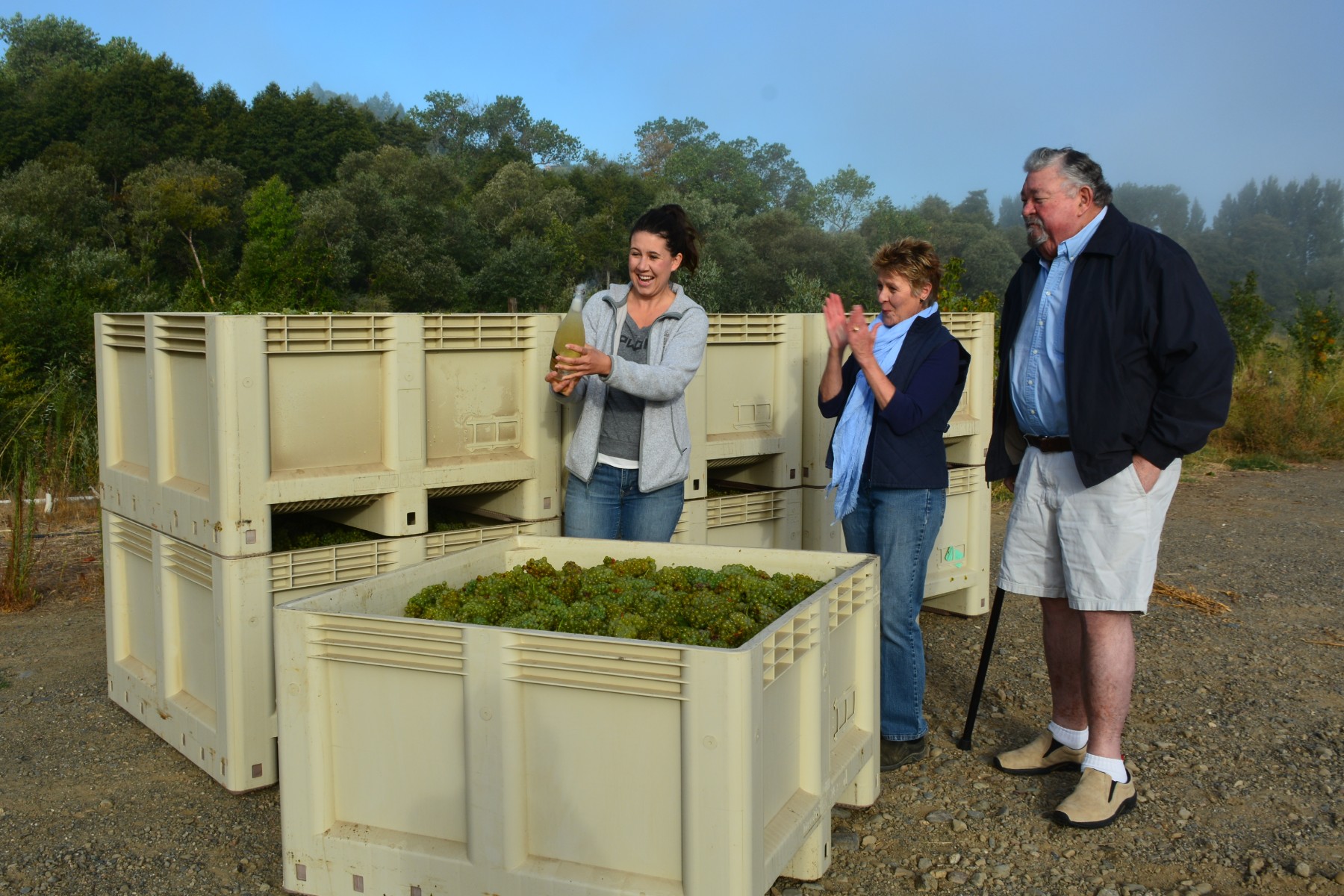 ...and the 1st grower sparkling house in Healdsburg

Is Amista a Grower Sparkling House?

Yes! We grow our own grapes from a single estate and craft them into Amista Vineyards sparkling wines. In the picture above, my husband Mike Farrow, winemaker Ashley Herzberg and I bless the grapes during the first harvest of the season.

What is Grower Champagne?

Grower Champagnes are grown and produced by the same entity. The makers have their eyes (and hands) on their own vines year-round, meaning that they are the ones controlling how the land is being cultivated and when the grapes are picked. And they make and bottle the wine according to their winemaking style and philosophy rather than selling the grapes and letting someone else make the finished product. Grower Champagne houses are usually small, and family owned.

That may not be such an unusual idea in the U.S. since most wineries are small, family owned and produce wines from their own vineyards (even though the largest volume is produced by a few large companies). However, that is not the norm in Champagne.

How is Grower Champagne Different from the Large Champagne Houses?

Traditionally, Champagne is produced by large houses – “maisons” in French. They purchase grapes from thousands - yes, thousands - of growers in the Champagne region of France. These production houses are multi-national corporations that make hundreds of thousands of cases. They are essentially Champagne factories. They are well known because they also have big advertising budgets. You’ll recognize the big names like Moet & Chandon, Veuve Clicquot, and Perrier-Jouet.

Another difference is that the large houses blend their wines from that vast number of vineyards across multiple vintages. The climate in northern France is variable and challenging and not every year is perfect for growing grapes. Blending across vineyards and vintages produces a more consistent flavor profile and style. When you are making large volumes sold around the world, people want the product to taste the same year after year.

Why Grower Champagne Has Become Sought After

Grower Champagne has become more popular in the last two decades as growers in Champagne decided to make their own wine in addition to selling to the large houses. Grower Champagnes are treasured because they are limited and hard to find. People love to discover hidden gems!

Grower Champagnes are rarely known outside of France because they are made in extremely tiny quantities. Unlike the large production houses, they typically don’t make enough to export. So, you have likely never heard of them unless you travel to France.

The other reason they are coveted is because they have become known for producing exceptional quality Champagne. When it comes to Grower Champagne, these farmers are working with the same parcels every year, carefully managing how the vines are farmed and choosing the right time to harvest to bring out the best flavors in the wine.

The early sparkling houses in California were introduced by iconic French Champagne houses like Louis Roederer and Moet & Chandon, which began investing in California in the 1960s and 1970s.

In California, it is more common for a winery to grow and produce wines from its own grapes. Sure, there are very large wine production corporations that source grapes from hundreds of growers and make the equivalent of hundreds of thousands of cases of wine, sold in bottles, boxes, and cans.

But over 80% of the wineries in California are under 5,000 cases. It is common for the smaller wineries to grow and produce their own grapes. The idea of “grower wines” is more traditional in California that has been the case in Champagne.

But that wasn’t the case for the new sparkling wine producers in California. The early sparkling houses followed the model of Champagne – large production houses that purchased fruit from many growers rather than growing their own.

As happened in Champagne the Sonoma sparkling wine scene is also transforming. The pioneers of sparkling that came in the first wave, are large producers owned by a parent corporation in Champagne and most continue to source grapes from other growers.

In the second wave, family-owned wineries emerged that craft sparkling wines from their own vineyards. These also tend to be large producers since making sparkling wine is more complicated and requires a greater capital investment in production equipment than needed for making still wines. Producing in volume enables the winery to take advantage of economies of scale.

Why Should I Care about Grower Sparkling Wine?

For those of you like me who are true lovers of bubbles, there a several reasons to care. One is the pure joy of finding beautiful sparkling gems made in very small batches and knowing that the same winery and winemaker nurtured that wine all the way from the grape to the glass.

If you appreciate experiencing the little variations from vintage to vintage based on the idiosyncrasy of the vineyard and the weather the year the grapes were grown, then you will enjoy exploring grower sparkling wines. It is more of an adventure than sipping the brand-consistent character of big sparkling houses – not that they aren't delicious, just less varied and interesting.

Another reason to care is because the wine is hand crafted by small wineries rather than produced in large volumes by a big corporate producer. It is a way to support the small family growers who have an intimate connection with the land, understand its peculiarities and can control the farming practices to ensure optimum quality.

You get a sense of their stewardship of the land and their love of turning their grapes into a finished product for others to enjoy. It's the same reason I go to the farmer’s market and choose a variety of freshly picked ripe tomatoes and talk directly with the farmer who grew them.

Come taste with us and explore a grower sparkling house for yourself!

3 Discoveries at Amista Vineyards for the Perfect Healdsburg Weekend

We are thrilled to be one of only two wineries featured in the FamilyVacationist article titled “The Perfect Healdsburg Weekend.” Even more exciting is that the writer, Christine Sarkis, uncovered three discoveries about Amista that made us smile. We couldn’t have said it better!

Discovery #2. “The winery has a self-guided vineyard tour with signs that explain the grape-growing and wine-making process. The stroll around the vineyard is a great way for kids and dogs (the winery is also dog-friendly) to work off some extra energy while soaking up some signature Sonoma sun,” says Christine.

Discovery #3. “The tasting room offers a number of food-and-wine pairings and its signature savory lemon popcorn is always on offer,” adds Christine. Try it while you “sip estate-grown sparkling wines, including hard-to-find sparkling grenache and syrah.”

Here are the stories behind the discoveries Christine uncovered.

We never thought we’d be in the wine business let alone be the first sparkling winery in Healdsburg. The creation of Amista Vineyards was a dream that my husband Mike and I never knew we had and never knew we shared. It emerged slowly over time.

I wrote a whole blog post about my Five Surprising Discoveries in becoming the first sparkling wine house in Healdsburg.

What Will I Learn on the Vineyard Adventure Walk at Amista Vineyards?

You will learn about the grapes, the wines we make from them and our commitment to sustainable vineyard management practices.

At harvest, a favorite activity is tasting and testing the sugar level in the grapes and guessing how soon they will be harvested.

There is more to see than grapevines. You can stand under our majestic 200-year-old oak tree and contemplate what life was like in California when it was just an acorn.

Then check out our backwater pond on Dry Creek that was constructed in partnership with the Sonoma County Water Agency and the Army Corps of Engineers. The project’s goal is to restore the habitat for the Steelhead trout and Coho salmon that inhabit these waters.

Another example of our commitment to sustainability is our solar covered patio. In fact, you may want to let the kids and the dogs do the tour while you take in the vineyard and hillside views while enjoying your wines and popcorn at your table on the patio.

One of our missions as sparkling advocates is to show people that sparkling wine isn’t just for special occasions or for serving only with fancy foods like caviar and canapes. We serve it with a bowl of our signature savory lemon popcorn – so simple and so yummy! 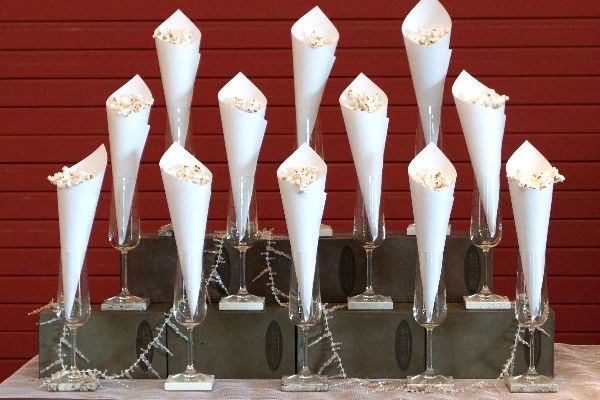 However, like most things on our wine journey, it came about because of a challenge turned opportunity. One year we were scratching our heads for something easy to serve at an annual event called Winter Wineland.

We purchased a popcorn machine and offered a popcorn bar with “cones” of popcorn and a selection of seasonings to try with our wines. It was a big hit.

Later we discovered how wonderfully popcorn pairs with our sparkling wines. My favorite is our Blanc de Blanc with a drizzle of olive oil and a dusting of lemon herb seasoning on the freshly popped corn.

Christine created a fabulous list of places to stay, eat and sip in Healdsburg – the same places we would suggest as locals. Read the full article, The Perfect Healdsburg Weekend.

We hope you’ll make your own discoveries at Amista Vineyards and come Taste with Us!